The Great Hurricane of 1900 that struck Galveston Island on the 8th of September impacted many lives and families.  The population of Galveston in the 1900 Census was nearly 38,000.  The loss of life from the storm is estimated at 15-23% of the populace.  Through unusual fortune most of my ancestors, who had been living on the island, survived the event.  Anna Metzger Hoffman, my great-great-grandmother whose daughter had married my great-grandfather, was one of the many souls lost in the storm.  It was work for the railroad that moved the others off of the island a couple of years before the storm to work in the new railroad shops built in Cleburne, Texas.  They moved back to Galveston around 1902 and were there to live through the rebuilding of the island. 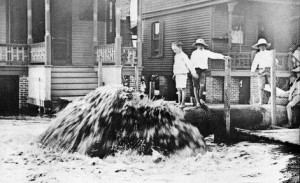 Leo P. Suter, my grandfather, was born in July 1903 on Galveston Island.  He had a couple of older brothers, both born in Cleburne, Texas, during the few years the family lived there.  Richard, born in 1897, and Alfred, born in 1900, with Leo were in their youth when the raising of the grade of Galveston took place.

The great seawall was built after the 1900 storm to protect the island from such disasters in the future.  The first section of the seawall was completed on July 29th, 1904, my grandfather’s first birthday.  The wall was extended over the years to the length it is now.  At 23rd Street and Seawall Boulevard, a pair of round top granite pillars were installed in 1904 for the Galveston Seawall and Grade Raising Monument to commemorate the combined projects to protect the city. 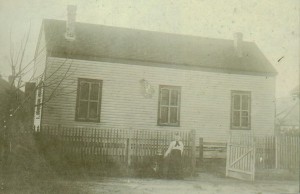 The grade raising of Galveston Island is perhaps a lesser known but just as important part of the rebuilding of Galveston. During the years from 1904 to 1910 the grade level of Galveston Island was raised by pumping in sand behind the newly constructed seawall and likely forced the routine relocation of residents in rental housing. The family of my grandfather moved several times on the island during this time.  They started on Avenue L, near 38th Street and later ended up on Avenue Q1/2 near 61st Street by the time the grade raising process concluded. 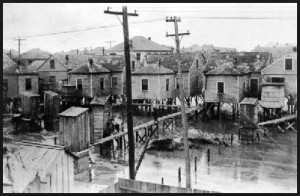 The house, the walkway, and the outhouse on stilts waiting for the grade raising fill.

The seawall was built to a height of 17 feet and the plan followed to raise the grade of the island by 17 feet behind the seawall and slope downward until it reached 8 feet on the Bay side at Avenue A.  The New York firm of Goedhart and Bates presented a novel approach to accomplish this.  Lindon Bates was a well known dredge designer who also designed the three-lake system at the Panama Canal. The idea was to dig a canal across the island to enable dredge boats to pass behind the seawall and deliver a muddy sandy fill on the island surface to raise the grade. The water in the slurry from the dredge boats would drain off leaving the fill which raised the grade level of property on the island. 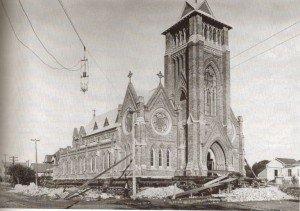 The canal was 3 miles long, 20 feet deep, and 200 feet across. It began at 8th Street and Avenue A by the South Jetty and roughly followed the curve of the seawall before turning at 22nd Street and following Avenue P1/2 to its end at 38th Street. About 350 houses had to be temporarily relocated to make room for the canal through the island.  More than 2000 buildings had to be raised including churches, schools, 1226 cottages, 413 one-story houses and 162 stables.  This also meant that water mains, gas lines, sewer lines, streetcar tracks, streets, sidewalks, fences, shrubs, trees, gardens, and outhouses has to be raised to the new grade.  One of the most amazing feats is the raising of St. Patrick’s Church, a 300 ton brick structure, which was lifted 5 feet using 700 jack screws. 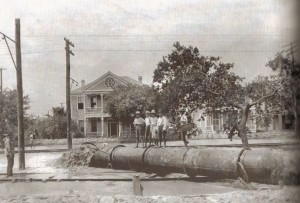 A worry for parents, a playground for children during the Galveston Grade Raising years

These times have made a fascinating story for me with a personal touch knowing my grandfather and his brothers were among the children living through this challenging and adventure rich environment in their early childhood.